‘Mediate Me’ at Gasp 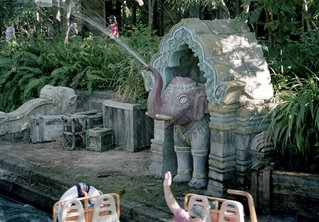 Guest curator James Nadeau of Boston intends his six-person exhibit “Mediate Me” at Gasp gallery in Brookline to plumb the nature of the self – and self-portrait – in our synthetic Sims era. “How is technology changing the way we view ourselves?” Nadeau ponders in the gallery brochure. “Am I distinct from my MySpace profile? Is it me, a reflection of me, or something that advertises me?”

Here Newburyport artist Sarina Khan-Reddy, an Indian Islamic-American, explores “the perpetuation of the colonist image, the construction of the exotic” in her photos of a Disney theme park’s faux India.

In “Picture Spot XI: Attraction 13 - Kali River Rapids Ride, Disney’s Animal Kingdom” (above), an elephant sculpture in a little shrine sprays water upon rafters spinning down a man-made river. In a shot of the “Maharajah Jungle Trek” (left), monkeys swing outside a building made up to look like a ruined palace or temple, with tourists milling about in the distance. There’s potential here in interrogating the crappy social messages broadcast by pop culture megaliths like Disney, but Khan-Reddy’s conceptual take is too easy, too familiar, to get you to really engage her critique.

Justin Beckman’s video “Wall” (left) opens with a straight-on shot of a wall’s wooden studs and laths. The Ellensburg, Washington, artist proceeds to pry off the laths one by one,

revealing a view of grassy rolling hills. His dog wanders by and lays down. When all the laths are gone, he pulls off a support beam and the studs begin to wobble in the breeze. Then he pulls them down and apart too. The process plays in fast-motion, like a hopped-up home improvement show. The gallery brochure says, “the artist attempts to make a direct correlation between suburban development and its impact on the way we view open spaces, while simultaneously creating a metaphor for the personal ‘walls’ we create in our daily lives.” Maybe, but for me the pleasure was pretty basic -- the tearing down and having the landscape revealed, the dog stopping in, the blowing wind, the speed of the action. It was fun.

Nadeau’s contribution to the show, “Rat Race” (below) is a pair of little monitors playing a digital animation, actually edited footage of him playing a first-person fighting-type video game. A tough guy materializes in a pizza joint, brawls with some hooligans, then bolts out the door and down several city streets, at one point knocking a woman down, before the thing loops back around to the beginning. 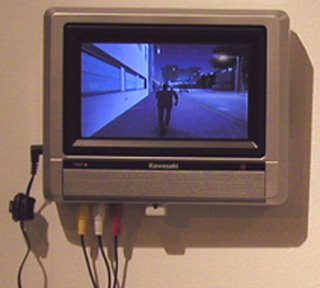 You watch nearly all the action from behind the lout, and sometimes hovering a bit above him, the sort of omniscient view you’d have if you were playing the character in the game yourself. Nadeau could be trying to talk about how video games and the Web free us to try on new personalities, play out fantasies, seemingly without strings attached, for good and for ill. But “Rat Race” simply replicates what it’s like to watch someone else play a bloody first-person shooter, rather than transforming it in a way that expands our thinking on the proceedings.

The exhibit is rounded out with work by Adriene Hughes of San Diego, Bostonian Dustin Williams, and Matthew Gamber, a professor at Savannah College of Art and Design and editor-in-chief of Big Red and Shiny. Hughes shows "Five Faces of Me" (below),

five self-portrait photos in which she uses Photoshop to fiddle with the size of her nose, eyes, lips and forehead. Williams contributes a geeky one-liner involving photos of himself made up like characters from the show “Saved by the Bell” with Freudian mumbo-jumbo printed on top. Gamber offers videos of (a) a man shoveling a snowy driveway and (b) a man mowing a big lawn. But many of these ideas remain undeveloped and their methods feel rote.