Governor Deval Patrick and the arts

Governor Deval Patrick continued “valuing” Massachusetts artists yesterday with a teensy inauguration speech shout-out (“I also see … the inspiration of our artists”) during his rundown of hopeful signs to counterbalance his catalogue of the Commonwealth’s problems.

Massachusetts art folks had a crush on Patrick during the campaign and their hearts were all aflutter when he gave a couple of shout-outs to the arts during his Nov. 8 victory speech ("You are ... artists looking to be valued"; "We have a mandate ... to help the creative economy flourish"). And when he assembled transition teams in November to help him shape his policy agenda, one of them was a 15-member Creative Economy team chaired by ICA Director Jill Medvedow. (If nothing else, this represents the growing clout of the Creative Economy mafia.)

Still, is Patrick’s engagement with the arts more than just pretty talk? Well, on Dec. 27, Patrick fulfilled one of the requests frequently heard by the Creative Economy team by announcing plans to reverse then-Governor Mitt Romney’s $383 million “emergency” post-election November budget cuts. This would restore $700,000 to this fiscal year’s Massachusetts Cultural Council budget, which represents 5 percent of the agency’s annual funding. Not a bad start.

MCC Executive Director Mary Kelley recently announced plans to retire at the end of March after leading the Commonwealth’s top arts agency for 11 years. The governor has no direct role in hiring the next MCC chief (that authority rests with the governor-appointed MCC board, which has hired a Boston-based executive search firm to help find a replacement) but it will be interesting to see how new day-to-day leadership at the MCC, uh, synergizes with Patrick’s emphasis on the arts.

Harold Bell, the charismatic 92-year-old Gloucester patron of the arts, died New Year’s Day. Besides being the father of the city’s current mayor, running the Mighty Mac company, and helping found the Cape Ann Symphony, he served as president of the Cape Ann Historical Museum from 1970 to 2004. He was behind many of the Gloucester museum’s triumphs over the past three decades. He doubled membership, lead an expansion of the facility, guided operations, and shepherded in gifts of art by Lane, Stuart, Sloan, etc. But Bell was also blamed for the institution’s elitist clubby atmosphere, which sparked repeated efforts to create alternative historical museums in Gloucester, and being part of a leadership that drove off talented curators, which has resulted in unambitious shows in recent years despite the museum’s sterling collection of Cape Ann art and artifacts. Does his passing auger change for the institution? The board is filled with Bell’s people, including his hand-picked successor, Gloucester attorney John Cunningham. Don’t expect any great shakeup soon. 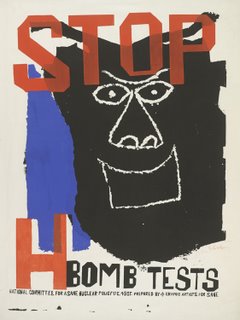 Here’s my review of “Dissent!,” a fiery greatest hits of five centuries of protest art, at Harvard’s Fogg Museum through Feb. 25. Check it out – especially the fabulous posters by Boston’s own Sister Corita – but the exhibit doesn’t figure out how to show protest art without neutralizing it by institutional embrace. (At top is Ben Shahn's 1960 screenprint "Stop H Bomb Tests." Center is Sister Corita's 1969 screen print "If I.") 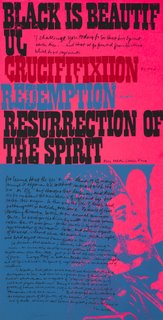 Reyes built a six-sided top (below) that you’re supposed to spin during negotiations to suggest what philosophy and corresponding Greek thinker you should adopt for your situation. The options encourage “players” to reconsider fixed negotiating positions, intellectual ruts. A giant red “See-Saw” allows one person to balance out nine others, a rumination on the power of the individual versus the power of the group, hierarchy versus teamwork. 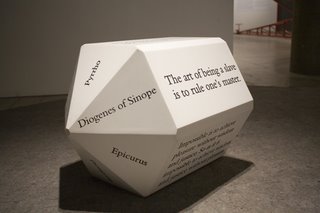 A curving wall of hollow blocks refers to traditional ways of keeping homes cool as well as the difficulty of adopting such sustainable architecture by pointing out that the Carpenter Center was designed to not need air conditioning and, well, now uses air conditioning. These are soft critiques and jokes, modest suggestions for improvement, but they get you thinking.

Los Angeles artist Sam Durant’s recent “Scenes from the Pilgrim Story: Myths, Massacres and Monuments” show at MassArt tried for a hybrid of agitprop and something more philosophical. I’d been looking forward to Durant’s exhibit because of his great 2005 gallery show in New York in which he proposed creating a memorial to America's wars with Native Americans by relocating monuments to Indian war dead from across the country to the National Mall in Washington, D.C. It’s one of those sharp, smart conceptual ideas that reframe our discussion of Native American culture and rights – and war, too – by taking what already exists and putting it in a new context. But his MassArt show was a bust. Durant, a Massachusetts native and member of the MassArt class of ’86, recreated a few outdated displays from a Plymouth wax museum and added lots of small-type signs to talk about the Pilgrims’ relationship with their Native American neighbors. His point: despite what museums might tell you, the relationship wasn’t too great and the Indians got screwed. Is this news to anyone who might go to an art school show? Is this news to anyone? 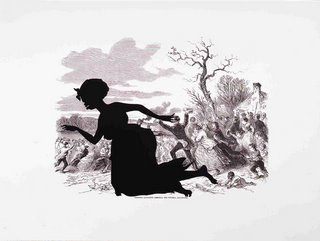 "Kara Walker: Harper's Pictorial History of the Civil War (Annotated)," Addison Gallery of American Art, Andover, Mass., Jan. 9 to April 15, 2007. Walker’s signature silhouetted characters become ghosts haunting period illustrations of the Civil War. A withering interrogation of the portrayal of African-Americans in history and their role in the war. 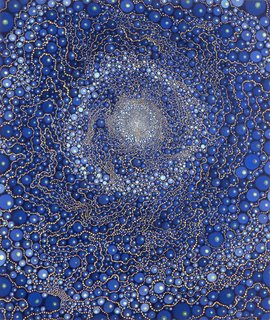 “Big Bang! Abstract Painting for the 21st Century,” DeCordova Museum, Lincoln, Mass., Jan. 20 to April 22, 2007. Fifteen Northeast artists (including Christi Rinklin and Sarah Walker) who aim to keep handmade abstract painting fresh in these virtual times. Expect lots of trippy virtual-looking paintings (like Barbara Takenaga's "Tremolo (Blue)," 2004-2006, at left). Also lots of abstraction that might as well be realist paintings of dot-matrix printouts or galaxies or computer screens or cells under microscopes. And a little bit of graffiti style for good measure.

“Thin Ice,” Jan. 27 to May 13, 2007, with “Our Land: Contemporary Art from the Arctic,” Hood Museum of Art, Dartmouth College, Hanover, N.H., March 27 to May 20, 2007. “Thin Ice” deploys Inuit art and crafts from the museum’s collection to consider how global warming affects native peoples of the Arctic, while “Our Land” presents a collection of contemporary Inuit art that was seen at Salem’s Peabody Essex Museum in the winter of 2004-’05. The threat of global climate change finally became one of our society's foremost concerns in 2006 thanks to Al Gore’s film “An Inconvenient Truth.” And unlike our wars against terrorism, Iraq, Afghanistan and civil liberties (which the art world is still pussyfooting around), it’s something pretty much everyone agrees is very, very bad and needs to be much more significantly addressed. So expect 2007 to be a big year for global warming art.


“Sensorium: Embodied Experience, Technology and Contemporary Art,” MIT List Visual Arts Center, Cambridge, Feb. 8 to April 8, 2007. The second half of an exhibit that, in it’s first half, proved to be one of the most provocatively annoying shows in recent memory. 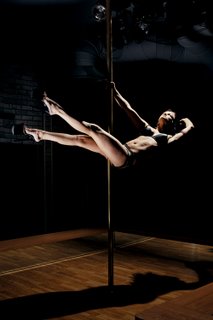 
“A New Key: Modern Belgian Art from the Simon Collection,” McMullen Museum, Boston College, Feb. 10 to July 22, 2007. A look at modernist art made in and as seen from Belgium, with works by Rene Magritte, James Ensor, Paul Delvaux and others, drawn from a significant French collection.

“Acquired Tastes: 200 Years of Collecting for the Boston Athenaeum,” Boston Athenaeum, Feb. 13 to July 13, 2007. A major survey of the venerable institution’s historical and artistic collections at its bicentennial. 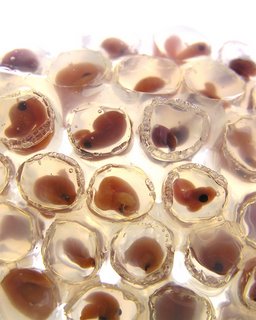 “It’s Alive! A Laboratory of Biotech Art,” Montserrat College of Art, Beverly, Mass., Feb. 16 to April 7, 2007. A group show investigating the weird and wonderful intersections between biology, technology and contemporary art. (Pictured is a detail of Brian Burkhardt's "Embryo," 2006.)

“Darwin,” Museum of Science, Boston, Feb. 18 to April 27, 2007. Darwin’s revolutionary theory of evolution – and continuing research in the field today – explored via an assortment of fossils, mounted specimens, bugs, live tortoises, an iguana, frogs, carnivorous plants, a recreation of Darwin’s study and more.

“Multiple Strategies: Beuys, Maciunas, Fluxus,” Harvards’s Busch-Reisinger Museum, Feb. 24 to June 10, 2007. Draws on Harvard’s permanent collection to look at the relationship of these two artists through their participation in the influential international art collective Fluxus. 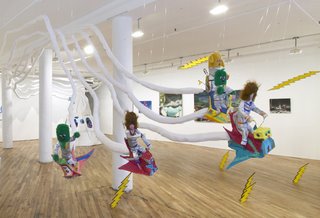 "William Wegman-Funney/Strange,” Addison Gallery of American Art, April 7 to July 31, 2007. A major survey of the Holyoke-native’s serious-funny art – with more than just Weimaraners. (Pictured is "The Tilted Chair," 2003.)

Here’s my review of the Danforth Museum’s Hyman Bloom show, which is part of Danforth Director Katherine French and company’s very welcome ongoing project to examine the history and legacy of the Boston Expressionists. (Pictured is Bloom's painting “Rabbi with Torah,” c. 1955. Courtesy of Joan and Barry Bloom.)

The history of 20th century American art is often boiled down to a single track out of New York, through Alfred Stieglitz’s modernist circle to the abstract expressionists, pop, minimalism, etc. But Boston Expressionism is part of a divergent American stylistic path that might be called passionate, visionary realism, for lack of a better term.

These realist expressionists started out the 20th century darker and moodier than the New York School, and wound up hotter, funkier, funnier. The work was frequently more socially concerned than New York School art, which I can't help thinking somehow relates to New York’s crush on French modernism -- with its passion for the good life reflected in still lifes, nudes and placid landscapes – and general disregard of German expressionism. Inspiration for passionate, visionary realist works, on the other hand, came from northern Europe -- altar pieces, genre painting, the dark, seedy, urban, political subjects of 20th century German expressionism -- as well as outsider art, pop culture and what could be called narrative surrealism (di Chirico, Dali, Delvaux, Kahlo, Remedios Varo).

Philip Guston, whom Aronson brought in to teach at Boston University from 1973 to ’78 and whom Boston Expressionism partisans claim as a member of their team, was perhaps the only artist to successfully negotiate the journey from expressionist realism to New York School abstract expressionism and back.

Musa Mayer’s 1991 book “Night Studio: A Memoir of Philip Guston,” reports that just as Guston was going public around 1970 with his shift back to expressionist realism and being pilloried in New York for it, Guston railed: “American Abstract art is a lie, a sham, a cover-up for a poverty of spirit. A mask to mask the fear of revealing oneself. A lie to cover up how bad one can be. … It is an escape from the true feelings we have, from the ‘raw,’ primitive feelings about the world – and us in it.”