The first sculpture you see when you visit Bostonian Steve Hollinger’s show "Atomic" at Chase Gallery is “Twenty-five Atoms,” a rack of 25 balls – or rather circles of film linked to suggest the skeletons of balls, or the orbits of atomic particles -- inside a glass walled box. As you watch, parts of the strips seem to appear or disappear as if by magic. 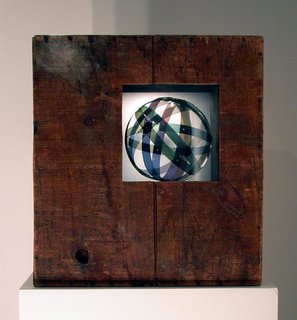 Hollinger repeats the trick in smaller kinetic displays built into stylishly antique wooden crates. Look in the window cut into one and see a glass vial holding a similarly appearing-disappearing film ball. When I asked how they work, the gallery presented with me with the official explanation sheet. Apparently the secret is that the things are made of polarizing film and hidden behind is a rotating disc of the same stuff. Depending on how the film in front and the film on the disc behind line up, the film in front appears transparent, black or somewhere in between. A quick inspection reveals that the discs are driven by solar panels on back (which inside the gallery are powered by light bulbs). It’s a neato optical trick.

And so alluring that you might not realize that Hollinger is ruminating on the potential and cost of atomic energy. In an artist statement, he says he’s moved by the “iconic beauty and potential of the smallest atomic particles,” while being haunted by the fearsome above-ground atomic bomb testing conducted between 1945 and 1960 -- those antique crates he uses are actually vintage explosives boxes. 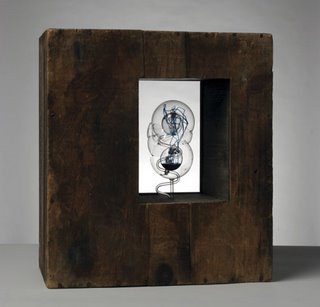 “Heart” has blue fluid bubbling through a system of teensy tubes, like a miniature mad scientist’s lab. “Cenotaph” is like one of those old timey dime amusement hall cranky animations. Look in a glass prism viewfinder atop the concrete box, step down on a floor pedal, and inside you see a series of cards flipping one behind the other so that a fellow with a spear seems to dance and then a mushroom cloud explodes behind him. It calls to mind how our military displaced people from tiny Pacific islands so they could test blasts there. But Hollinger puts it across with the subtlety of an old black and white cartoon

What holds you is the gee-wiz surprises of Hollinger’s devices and the nuance and delicacy of his craft. The ambition of his subject is admirable, but here his message struggles to catch up to his formal achievement – by turns so softly whispered that it disappears behind the beauty of his visual effects or so bluntly stated that it clashes with the subtlety of his workmanship. His technique evidences great complexity – if only the content here matched it.