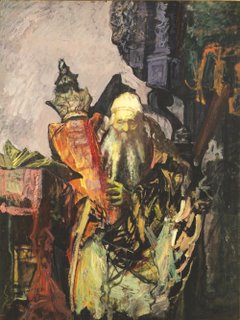 Here’s my review of the Danforth Museum’s Hyman Bloom show, which is part of Danforth Director Katherine French and company’s very welcome ongoing project to examine the history and legacy of the Boston Expressionists. (Pictured is Bloom's painting “Rabbi with Torah,” c. 1955. Courtesy of Joan and Barry Bloom.)

The history of 20th century American art is often boiled down to a single track out of New York, through Alfred Stieglitz’s modernist circle to the abstract expressionists, pop, minimalism, etc. But Boston Expressionism is part of a divergent American stylistic path that might be called passionate, visionary realism, for lack of a better term.

These realist expressionists started out the 20th century darker and moodier than the New York School, and wound up hotter, funkier, funnier. The work was frequently more socially concerned than New York School art, which I can't help thinking somehow relates to New York’s crush on French modernism -- with its passion for the good life reflected in still lifes, nudes and placid landscapes – and general disregard of German expressionism. Inspiration for passionate, visionary realist works, on the other hand, came from northern Europe -- altar pieces, genre painting, the dark, seedy, urban, political subjects of 20th century German expressionism -- as well as outsider art, pop culture and what could be called narrative surrealism (di Chirico, Dali, Delvaux, Kahlo, Remedios Varo).

Philip Guston, whom Aronson brought in to teach at Boston University from 1973 to ’78 and whom Boston Expressionism partisans claim as a member of their team, was perhaps the only artist to successfully negotiate the journey from expressionist realism to New York School abstract expressionism and back.

Musa Mayer’s 1991 book “Night Studio: A Memoir of Philip Guston,” reports that just as Guston was going public around 1970 with his shift back to expressionist realism and being pilloried in New York for it, Guston railed: “American Abstract art is a lie, a sham, a cover-up for a poverty of spirit. A mask to mask the fear of revealing oneself. A lie to cover up how bad one can be. … It is an escape from the true feelings we have, from the ‘raw,’ primitive feelings about the world – and us in it.”